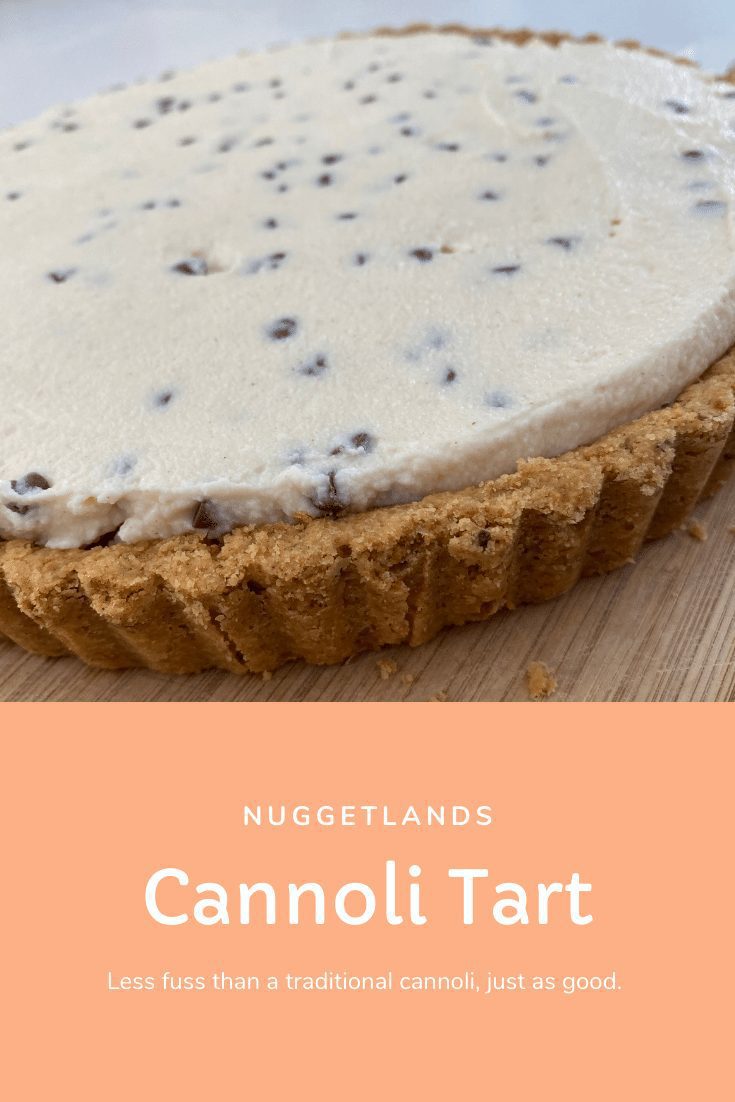 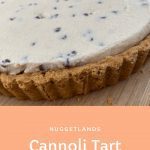 This cannoli tart recipe came about after we went to a wedding in NYC last month. The filling on the wedding cake had a cannoli cream filling that was to die for. So when the group texts started about our next family dinner night with our friends and a pasta theme was suggested – I knew I needed to bring that cannoli flavor into whatever I brought.

What came about was a pistachio tart crust, a layer of chocolate ganache, and a cannoli creme filling.

A traditional cannoli is a deep-fried pastry shell filled with cannoli cream capped with either chocolate chips or crushed pistachios on the ends. It’s my favorite dessert but not one that I wanted to tackle in the time I had to bake.

I knew I wanted to deconstruct it and bring those elements into a simpler to make dessert. Enter my cannoli tart.

Every tart recipe I found was for mini-tarts. I had less than zero interest in making 9 of these.

I love this tart pan by Wilton so I was looking to make something with what I had at home. After reading countless cannoli recipes, I decided to come up with my own. I adapted a few different recipes I found online and after my husband recommended I do a test run before our dinner party, I think I nailed it.

How to make a Cannoli Tart

Before you even begin to make the elements of this dessert, make sure you drain your ricotta cheese. I usually do mine overnight. Even if you buy the kind that says it’s drained, you can still get more moisture out of it. The drier, the better.

The first step is to make and bake your tart crust. This is closer to a shortbread cookie dough than it is a traditional pastry tart crust. The first time I baked this I didn’t use my pie weights, just lots of forking (is that a word?) to vent the dough. It still puffed up but while it was warm, I pressed it down and it was fine. The second time around, I used my pie weights. Didn’t make a huge difference but it baked flat so it’s really a personal choice.

While the tart shell is cooking, get started on the chocolate ganache. The key to a really good think ganache is letting it get to room temperature as naturally as possible. So give it time to set while the tart shell cooks and cools.

This cannoli filling is as close to a traditional cannoli filling and less of a no-bake pie filling – there is no mascarpone cheese to thicken it, just ricotta, sugar, and some spice.

Ever since our kitchen remodel, I’ve been more and more into baking. Check out some of my other recipes that are always simple and delish.

Decontructed cannoli in this easy to make tart..