A preschooler’s right of passage.

Sure I’ve heard of Hand Foot Mouth Disease but naively, I didn’t think any of us would get it.

No one at school had it. Didn’t hear of anyone at our dance studio with it either. So when our oldest had a fever one Sunday morning, I didn’t even think that could be it. But it was.

Big Nugget had just started back at school on Sept 1st. The new school year runny nose promptly showed up the next week. I had come home from the gym one Sunday morning and she had a 101-degree fever and just wanted to lay around and watch tv. She mentioned that her throat hurt so I thought maybe this cold was turning into something a little more intense. I gave her some Motrin and within an hour, she said she was feeling fine and had a lot more energy. So I thought we were out of the woods.

The fever didn’t return at all so Monday she went to school like normal. When I picked her up, she had a small rash on her face. Once again, I chalked it up to a messy face from playing and snack time. Yep, I’m completely oblivious. That night she was extra fussy and resistant to bedtime. She kept walking up every hour crying and saying her feet itched. No amount of lotion would help so I finally gave her some Tylenol and she slept (just in time for the baby to wake up though, lucky me).

Tuesday is cleaning lady day so our plans were to go to swim class and head straight to Legoland. While she was rinsing off after swim class, she showed me the ‘polka dots’ on her hand. Boom. Light Bulb. I asked to see her feet. More polka dots.

It was an instantaneous rush of emotions. Empathy. Panic. Concern. And guilt. Oh, so much guilt.

The itchy feet the night before, the seeming refusal to sleep, was actually my sweet girl in pain. And I didn’t handle it well and now I was near tears as she kept saying, “I’m sorry Mamma”. Ugh.

I told her that we couldn’t go to Legoland, instead, we would go to Starbucks and walk at the beach to kill some time. The nurse I spoke with at our Pediatricians office confirmed my suspicion. I called both her swim school and preschool to let them know so they could take the necessary precautions to limit the spread.

How do you treat Hand Foot Mouth??

HFM is highly contagious. It’s viral so all you can do is let it run its course. So for 7 days, I needed to keep her away from her baby sister and any other kids. No sharing of utensils or drinks. Wash hands frequently. Treat the symptoms with over-the-counter medicine. And to sanitize everything I could.

I was determined to keep this isolated just to her and not let it spread to the baby – if it wasn’t too late. All the plush toys were put into the washing machine on sanitize cycle. All the wood and plastic toys were soaked in scalding hot water with vinegar. Everything was wiped down with Clorox with bleach and we switched from Meyers kitchen cleaner to Clorox with bleach. My eco instinct when out the window when I was faced with the possibility of this spreading – two weeks before a big family trip to Disneyland.

Big Nugget got to eat loads of popsicles, pasta, avocado, and a handful of trips to Menchies for froyo. We eat fairly clean and don’t keep sugary drinks in the house. She’s never even liked fruit juice. The novelty of a Gatorade was super helpful when I was desperate to keep her hydrated. 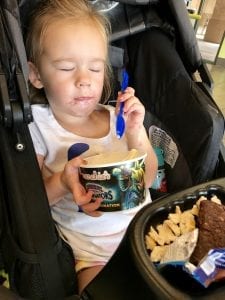 A few things that helped us – RinseAid, Benadryl (we used dye-free but warning, it tastes horrible), and Aveeno Anti-Itch cream. I threw my screen time limits out the window and we watched of few of my favorite Disney movies in preparation for our trip. We did a few outings but made sure that she stayed confined to her stroller seat and didn’t touch anything. She had such a good attitude and didn’t even put up a fight when we went to her favorite mall and she couldn’t ride the rides. I was so proud of her. She made the week home as easy as possible. Extra screen time and lots of popsicles played a huge role in that. So far, everyone else is in the clear. Big Nugget is feeling better and back to school today. I’m looking forward to getting back to my normal routine of preschool pick-ups and keeping the Little Nugget from eating all the dog food. Knocking on wood that it stays that way.